Things to do in New Mexico while not finding treasure

Posted on April 8, 2013 by oaktreesandmariachi

This weekend, the wife, the youngun and I set off on a great adventure into the wilds of the Jemez.  Ok. Not really a “great adventure” so much as chance to get out of the house and breath some fine mountain air. While we were out, I kept an eye out for the Fenn Treasure as perhaps it may be laying by the side of one of the roads of which we were driving. Yeah, not really.

In case I haven’t mentioned it, which I’m pretty sure I have a million and two times, the wife is with child. She’s been feeling a bit of the cabin fever, especially with her recent battle against Kidney Stones and problems breathing, so I threw her in the car, strapped the kid to the top and headed north for a day trip of some New Mexico National Monuments.

Our first stop was at the Coronado State Monument

First, a few things about this picture.

• You may notice my wife’s face is blurred out.  I assure you that is not a normal look for her. She just doesn’t go walking around blurried faced.  She did warn me however that should I post a picture on the internets of her without makeup, I would one day wake up to find a horse head on my pillow… (She didn’t say horse head because she’s never seen the Godfather but you get what I’m saying…)

• My jeans are dirty like they are, because, these are my famous “treasure hunting” jeans. You may have seen them in previous posts.  Autographs available upon request.

• Finally, that is not a subdivision behind us, it is in fact an ancient Pueblo village, where ancient folk used to walk around doing ancient things and trying NOT to draw pictographs of their wives without makeup… just saying.

In the entire time I’ve lived in New Mexico, I’ve never visited the Coronado State Monument. Considering it is only 15 minutes or so from where I live.  If you stop by, make sure to say hey to Alex, the park ranger and ask him to give you a tour of the paintings they have hanging up there, made about the year 1300.  Be sure  to ask about the one of the “Egyptian” who visited the pueblo…. 900 years ago.

A better picture of my son at Coronado State Monument minus the Dirty Eye.

We didn’t spend as much time as I would have liked because the boy was getting hungry and cranky and apparently feeding kids is more important than ancient history… that’s what my wife said anyway..

So we got some grub at the local Blake’s Lotaburger, which was horribly overcrowded, then headed up 550 to San Ysidro, the turn off to the famous Jemez Ruins, which used to be the home of the ancestors of the folks living at the current Jemez Pueblo, which most folks like myself are not invited into…with good reason I suppose. It’s also the turn off to the famous hippy hangout, Jemez Springs.

Fun Fact: Jemez is a spanish version of the word hay mish.  When asked by the spanish coming into the pueblo to dine with the folk at Jemez for the first time, they asked em, “Hey fellas, What do you call yourself?”, to which one fella of the Pueblo, presumably the Tourism Director, replied, “People”… Which is what hay mish means.  Unfortunately, the Spanish and most of those coming after never really caught on that they were people rather than slaves and subjects… <—insert editorial. 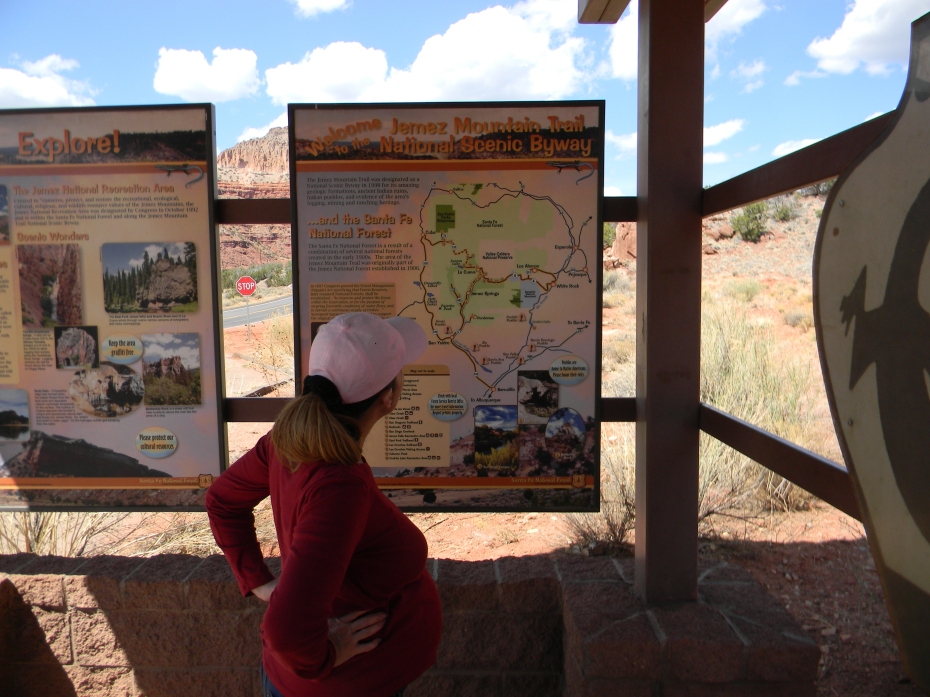 Stopping on the road to Jemez Ruins

My wife slept on and off during the short trip up there and was only awakened by my many “Hey!  Look at that! Did you know in (insert guesstimated time period) that (insert partly factual statement about said place)”.  My son on the other hand, didn’t even pay attention to my many intellectual and historic oral spews. He slept the whole way.

She did get out to stretch her overly stressed legs and back when I stopped for a bit of a pee at the “Welcome Sign to Jemez”.

So when we got to the the Ruins, I left them to their own sleepiness and walked around oohhing and awing by my own self. 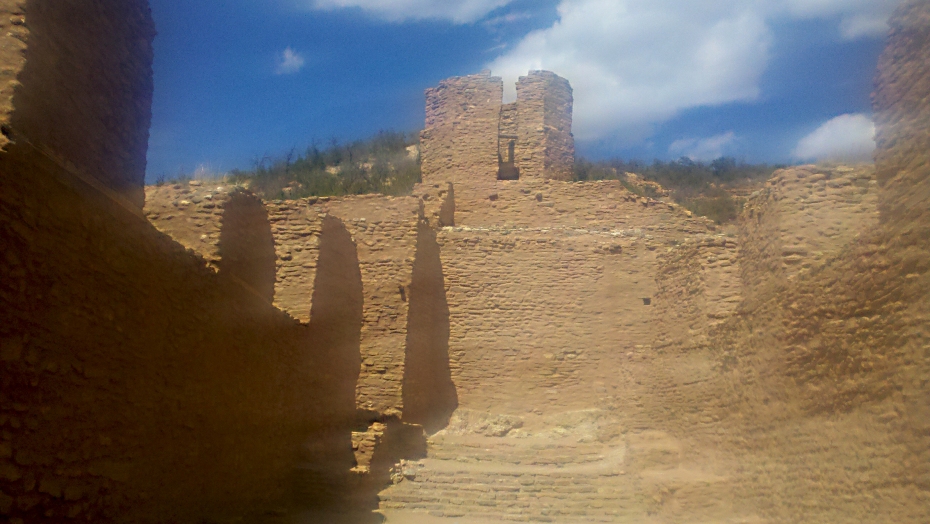 Didn’t take too many pictures as I left my camera in the truck and only had my foggy phone with me. Just between you and me (or is it you and I?) I dig (not literally) old historic things like these.  I tend to let my imagination fly in these places.  The history of people who occupied the same space I am in at that moment, and what they did and how they lived is fascinating to me. Not even just the ancient people but folks from the 1960s back to 150000 years ago is an amazing journey of thought.  2000 years from now, I doubt there will be any mystery about us.  We have labeled and stowed away so much information about who we are and what we’ve done that I can’t imagine any kind of serious interest by our descendants. Interest comes from the mystery not the facts. When our lives are so detailed in blog posts, and videos and pictures and books and tweets, who’s gonna really care?  Archeologist will have to find a new profession in the future, because there won’t be any new thing to discover.

Sad if you ask me…as I write in my blog and post pictures of my life….

We rounded out our trip by stopping by the Valle Caldera.

The Valle Caldera is an old Volcano.  It’s gorgeous. Amazingly beautiful. Unfortunately, the meal from Blakes Lotoburger caught up to me about then so we had to run down the road until I found a proper place in the woods to pay homage to the pulled pork sandwich. Was that too much information.  Sorry.

We were gonna stop by Bandolier but by the time we got to the gate it was already 5 and we were all tired and cranky.  Plus, if you have allergies, going into the mountains to get some fresh mountain air is not all its cracked up to be, so we just headed on home.

That, is pretty much the sum of our trip. A day in my life if you will. You’re welcome. I’m sure your awe inspired to take the trip yourself…

Just in case you get a chance while out here on vacation or treasure hunting or research, I highly recommend visiting some of the state’s monuments. The monuments are interesting, but the road trip itself is worth the time.

So there you have my addition to the State Tourism Machine. I’m sure they’re grateful I wrote it…

Be careful out there and I’ll see ya in the woods,